A former youth development manager who suffered a significant head injury and psychological trauma after he was knocked off his bike by a car has been compensated with Thompsons Solicitors’ help.

Father-of-two Sean Craven, now 42, was cycling home from work through Outwood in Wakefield, West Yorkshire, when he was hit by a car that pulled out of a junction without warning. He was thrown over the car and landed a number of metres down the road.

The union member was knocked unconscious and, when he came around, had severe pain across his head. The accident left him with a fracture to his skull as well as multiple spinal fractures. He had to wear a metal ‘halo’ frame for three months to try and deal with the spinal fractures but that slipped forward, meaning he had to undergo a fusion procedure with plating and a collar. He also developed tinnitus. 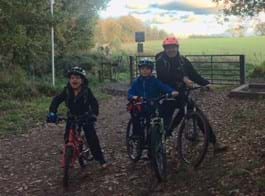 The accident caused Sean to suffer from serious psychological trauma as well as post-concussion syndrome. He continues to need regular physiotherapy and counselling, three years after the accident.

Sean said: “I don’t know how the driver didn’t see me, but they didn’t and, as a result, I’m left with lifelong injuries. I’ve had a number of medical procedures but they can only do so much – I have to accept that I will be in pain for a very long time.”

After his accident, Sean - whose pre-accident hobbies included cycling, canoeing and climbing mountains - turned to Thompsons Solicitors to help make a compensation claim. Thompsons’ specialists obtained evidence from medical experts who said Sean wouldn’t be able to return to his job as a youth development manager, which involved supporting young people with behavioural issues to succeed in the community, because of his psychological injuries. His physical injuries put a stop to the hobbies he regularly enjoyed before the accident.

After gathering all the evidence and extensive negotiations, Thompsons Solicitors secured a substantial settlement for Sean, to cover his pain and suffering and his loss of earnings as he attempts to find new employment.

“I looked at a few law firms but Thompsons stood out to me,” Sean continued. “I saw how Thompsons’ specialists had helped lots of other people who had suffered like me, cyclists or otherwise, to give them a chance of life after injury.

“I’m glad to say I too have been able to move on, at least to some extent, from what happened. While I haven’t been able to find a new job, I’ve felt well enough to start voluntary work at a forest school, and I hope to do an education training course so I can return to full time work with young people. I hope I can eventually return to mountaineering, cycling and all of the other outdoor activities I used to do with my wife and young children.

“Without Thompsons, none of this would have been possible, so I want to thank them for everything they have done.”

"I have to accept that I will be in pain for a very long time.”

Imogen Wetton, who supported Sean with his serious injury compensation claim, added: “Sean suffered horrendous and totally avoidable injuries because another road user shot out of a junction, not paying attention and took him out. Unfortunately, thousands of cyclists suffer serious, and too often fatal injuries on UK roads every year. For decades, Thompsons has fought for cyclists injured on the roads like Sean and supported campaigns to ensure they are better protected across the UK.

“Sean has made an impressive recovery but still has a long way to go to be close to how he was pre-accident. We’re proud to have played a part in ensuring he has a compensation package that allows him and his family to focus on his health and not worry about finances as he recovers.”