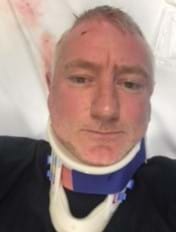 A Bectu member has secured more than £158,000 in compensation with the help of his union and Thompsons Solicitors after an accident in Germany left him with significant injuries.

Anthony Brookes, 54, was part of a team working on a major healthcare exhibition in Berlin in 2017, when an attempt to rush the unloading of an HGV could have cost him his life.

The York man, who was a self-employed project manager, said: “It was an early start - as is normal with these sorts of events - to make sure the client’s stand was in place for the opening of the exhibition. We were getting stuck into the job when a manager at Just Communicate, the firm we were supporting, told us we were needed elsewhere to help unload an articulated lorry.

“The task was not what we had been contracted to do but, in the world of events, it’s often a case of all hands to the deck because we understand that the show must go on.”

The manager who pulled Mr Brookes and his colleagues away from their contracted work did so because, in his opinion, the driver of a forklift truck who was unloading the lorry wasn’t working quickly enough.

Mr Brookes said: “In fact the forklift driver was actually working at a safe speed. It was just that the process hadn’t been thought out properly and they didn’t want to pay him the extra hour the job was going to take.”

As Mr Brookes and his colleagues helped with the unloading, some heavy flight cases dislodged and fell off the trailer onto Mr Brookes’ head as he stood on the ground below.

Mr Brookes was knocked unconscious and rushed to hospital where he had emergency CT scans and X-rays. It was found that he had suffered a mild traumatic brain injury and a skull laceration.

Since the accident, Mr Brookes has developed Post-Concussion Syndrome, Post Traumatic Stress Disorder and seizures, which means that his ability to work has been seriously compromised.

As a member of the Bectu sector of Prospect, Mr Brookes was able to secure free legal support from Thompsons Solicitors.

He said: “Thompsons got in touch very quickly and gave me the help and support I needed. Making a claim was a very complex process and it was a big learning curve for me, but they were there to make sense of it all on my behalf and keep me up-to-date with everything from beginning to end. Our client, Anthony Brookes, with his wife Julie

“For a long time, I couldn’t go out or do anything. The only thing that got me through it was the incredible support of my wife, Julie, and the rest of the family, who I am blessed to have around me.”

Martyn Gwyther, specialist at Thompsons Solicitors, said: “The accident happened overseas but our specialist team made sure that the claim could be litigated in England where Mr Brookes was likely to receive more complete compensation for his injuries.

“The reality is that the accident should never have happened in the first place. Standard health and safety procedures were ignored to try and save time and money and Mr Brookes paid the price.”

Cora Green, Prospect’s legal services officer, added: “This case demonstrates the benefits of union membership. By pursuing this claim through Prospect’s legal scheme with our solicitors at Thompsons, Mr Brookes is able to keep 100 per cent of his compensation. Health and safety procedures exist for a reason and Prospect will continue to support members who have been injured at work and are seeking justice.”