1984 saw a year-long strike by the National Union of Mineworkers, following the closure of 20 coal pits and the loss of 20,000 mining jobs by a newly elected Conservative Government.

The 1984 strike followed on from the disputes in 1972 and 1974. In 1972 the miners came out on strike for higher pay, with a successful result. But by 1974 they had slipped back again. The government of Edward Heath refused to compromise on a 7% rise and a strike began whereupon the government declared a state of emergency, imposed a three day week and called an election which they duly lost.

The incoming Secretary of State for Employment, Michael Foot, implemented a Pay Board report which showed how miners’ pay had dropped since 1972. As well as increases in pay, there were two other important results of the strike; the implementation of a scheme for compensation of pneumoconiosis sufferers, and a new superannuation scheme which commenced in 1975. 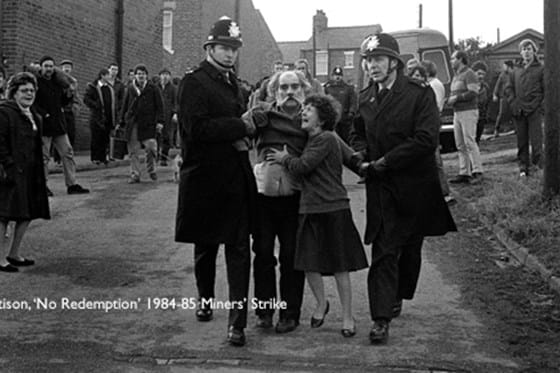 One example of a case reported in the law reports arising out of the dispute was Thomas v NUM, a case which highlighted a number of issues, and where Thompsons once again represented the union:

On March 9th 1984 the South Wales area of the NUM passed a resolution to support the national union in strike action and to stop work on 12th March. In November 1984, some members including a number of the plaintiffs, returned to work. They were met by large scale picketing. Six pickets were selected by lodge officials to stand at the colliery gates and a large number of others were kept back from the approach road by police. There was evidence of picketing near the homes of working miners and in one case outside a college one of the miners was attending, together with evidence of action outside other industrial premises. The plaintiffs sought injunctions restraining the NUM (South Wales Area) from organising unlawful picketing or demonstrations and from funding and organising secondary picketing outside South Wales.

The judge decided that the working miners were entitled to use the highway without unreasonable harassment, and the picketing at the colliery gates, at miners’ homes and at the college was unreasonable. The pickets should be limited to peaceful picketing by numbers not exceeding six. However, the judge refused to grant any injunction to restrain picketing at other collieries or secondary picketing since it was by no means inevitable that the same would involve criminal acts. He also rejected the claim brought against the national union and co-ordinating committee.

By January 1985 the strike was beginning to disintegrate as miners facing increasing financial hardship began to return to work. The strike came to an end on 3rd March 1985. By 2002 there were just 13 deep coal mines in the country where once there were 170, and the membership of the NUM had fallen to 5,000 compared to 187,000 in 1984.