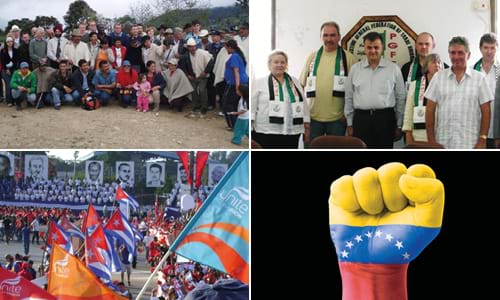 Since our foundation in 1921, we have stood shoulder to shoulder with the trade union movement and have fought for the rights of those who have been wronged or mistreated both in the UK and across the globe.

Learn more about some of our most important international campaigns below:

Thompsons' partners took part in multiple union delegations to the Occupied Palestinian Territories to see first-hand what was going on in the West Bank cities of Jerusalem, Bethlehem, Ramallah, Nablus Hebron and Haifa, as well as other towns and villages.

There they met with Palestinian trade unions and human rights groups.

They were harrowing trips: group members were forcibly ejected by settlers in Hebron and tear gassed in Bil'in. Delegation members reported that they were shocked at the extremes of human rights abuses, lawlessness, and cruelty inflicted on the Palestinian people.

As a consequence, Thompsons decided to affiliate to the Palestine Solidarity Campaign (PSC) and has since worked with unions to raise awareness of the desperate situation of the people in the occupied territories by speaking out about human rights abuses when it can.

Justice for Colombia was established in 2002 by the UK trade union movement to campaign for peace and social justice in the South American country of Colombia. It was founded in the wake of an ongoing human rights crisis and a period of sustained violence directed at trade union members and other civil society activists.

International solidarity plays a key part in Justice For Colombia’s campaign, helping to unearth and shed light on the human atrocities conducted in Colombia and demonstrate the widespread global, social and political opposition to them.

Thompsons joined comrades from across the trade union and Labour movement on foreign delegations to visit Colombia and show solidarity with the individuals and communities affected.

Working with Justice for Colombia, Thompsons campaigned for the release of political prisoners which resulted in the freeing of a number of trade union activists held unjustly, in appalling conditions.

With our trade union colleagues from Unite, we worked to strengthen the human rights department and set up a legal department for Fensuagro - Colombia's second-largest trade union and one of the most persecuted.

For more information visit the Justice for Colombia website.

We have worked extensively with partners from the trade union movement and the Cuba Solidarity Campaign to defend the rights of the Cuban people to self-determination, campaign against the illegal U.S. blockade and for the freedom of the unjustly imprisoned Miami Five.

Despite its size, Cuba has established a model health service and education system, and is an inspiration in the way it protects its public sector. It offers international solidarity throughout Latin America and around the world, and regularly sends doctors where they are needed.

When the Soviet Union collapsed and Cuba faced enormous difficulties, Thompsons worked with UNISON and other unions to deliver much-needed supplies, and in particular ambulances, to the Cuban health service.

The links established then have since been used to work with individual unions and the TUC to develop solidarity with the CTC (the Cuban equivalent of the TUC), and with other Latin American countries who support Cuba.

The Venezuela Solidarity Campaign is a UK-based group which seeks to support Venezuela in defence of its sovereignty and independence, protect Venezuelan people’s rights to determine their own future free from external forces and to promote democracy and social progress in the country.

Thompsons counts 18 national trade unions, SERTUC and the Yorkshire & Humberside TUC among the partners affiliated to the Venezuela Solidarity Campaign.

We support the campaign in highlighting and correcting inaccuracies and distortions made about Venezuela in the press and other media.

We also support the Venezuela Under Threat campaign by speaking and chairing meetings.

We sponsored the launch of Oliver Stone's film, South of the Border.

More on our work with trade unions