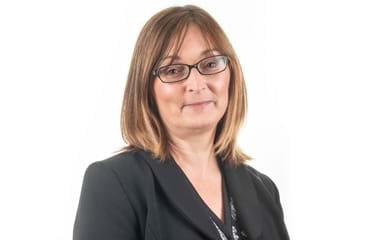 Gillian is an experienced accident at work lawyer based in Thompsons' Sheffield office.

Having dealt with accident at work claims for many years, she has gained experience of dealing with a wide variety of different types including slips and trips at work and manual handling accidents.

Gillian has an in-depth knowledge of health and safety at work legislation.

After reviewing details of a case, Gillian can quickly advise clients if she thinks they have a valid claim for compensation. She prides herself on her ability to recover the maximum amount of compensation to which her clients are entitled in the shortest possible time.

Below, you will find a small selection of the accident at work claims that Gillian has successfully dealt with from Thompsons Solicitors’ Sheffield office.

A hospital worker was driving a battery-powered tug up a ramp, pulling two full trolleys of linen, when the power to the tug cut out. Although she removed the key, applied the foot and hand brakes, she was concerned that the tug was still liable to roll down the ramp and injure either a member of the public or a member of staff.

As she had no radio to call for assistance, she decided to lift one of the linen trolleys from the tug in order to reduce the weight on it and stop it from continuing to roll backwards. As she did so, she sustained a severe soft tissue injury to her upper spine. The claimant and her colleagues had warned management previously that the tugs, which were old, were liable to cut out as they would not hold power properly. After this incident, the Trust brought in another tug from a local hospital.

The hospital’s insurers denied liability until Gillian issued court proceedings. She was then able to settle her client’s claim for £3,500.

Gillian’s client lost the tip of their left thumb retrieving a loose bag from a bread-bagging machine. The bagging plate had dropped even though there was no problem with the bread feeding down the line.

Gillian discovered that her client’s employer had not carried out a proper risk assessment of the process used and that the machine had not been regularly inspected and maintained. She recovered £5,200 compensation on behalf of her client.